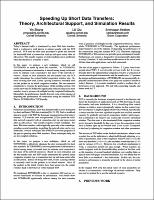 Today's Internet traffic is dominated by short Web data transfers. Such a workload is well known to interact poorly with the TCP protocol. TCP uses the slow start procedure to probe the network for bandwidth both at connection start up and upon restart after an idle period. This usually requires several roundtrips and is inefficient when the duration of a transfer is short. In this paper, we propose a new technique, which we call TCP/SPAND, to speed up short data transfers. In TCP/SPAND, network performance information is shared among many co-located hosts to estimate each connection's fair share of the network resources. Based on such estimation and the transfer size, the TCP sender determines the optimal initial congestion window size. Instead of doing slow start, it uses a pacing scheme to smoothly send out the packets in its initial congestion window. We use extensive simulations to evaluate the performance of the resulting system. Our results show that TCP/SPAND significantly reduces latency for short transfers even in presence of multiple heavily congested bottlenecks. Meanwhile, the performance benefit does not come at the expense of degrading the performance of connections using the standard TCP. That is, TCP/SPAND is TCP friendly.