Economic and Nutritional Implications from Changes in the U.S Agricultural Promotion Efforts 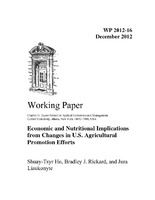 Promotion programs that subsidize advertising for exported agricultural products continue to be employed in the United States and elsewhere despite much criticism that they are an inefficient use of taxpayer money. At the same time others have advocated for an increase in funds to support domestic advertising for fruits and vegetables; they see a role for public investment in such an effort given consumer trust in the government regarding messages about food choice and health. Because much of the U.S. trade promotion expenditures are applied to fruit and vegetable crops, we investigate the economic and health effects from changes in both export and domestic promotion expenditures for horticultural and non-horticultural commodities. Simulation results show that even modest decreases in trade promotion expenditures coupled with a corresponding increase in domestic promotion efforts have the capacity to influence domestic market conditions, caloric intake, and nutrient consumption.