An Econometric Evaluation of A Geopolitical Theory of Oil Price Behavior 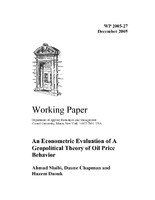 Previous work on crude oil price modeling has generally focused on two theoretical approaches, either the optimal control analysis of pricing of a depletable resource, or OPEC as a partial monopolist setting oil prices to maximize net present value. Neither has been wholly satisfactory. We consider a different perspective, a game theory based framework in which political and military factors interact with economic considerations for oil exporters and importers to define a target price zone (TPZ). We analyze several issues in this context: monthly vs. annual average prices, beginning and ending dates for TPZs, degree of stability in several price series (WTI, Brent, etc.), FOB and landed prices, real or nominal prices, OPEC behavior, and effect of the Euro exchange rate on dollar denominated oil prices. We conclude that a TPZ system was in operation from 1986 through 2003 and that OPEC acted as a political cartel exercising market power by controlling production in order to seek to maintain prices within the TPZ. The TPZ worked imperfectly but with a substantial degree of predictability for 18 years. In 2004 and 2005 the TPZ system deteriorated for several reasons, and has not yet been re-established.