Food Stamps, Food Insufficiency and Health of the Elderly 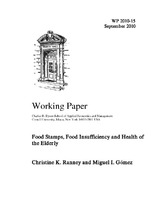 Our overarching goal is to understand critical determinants of low-income elderly Americans’ well being as measured by health status. We focus on whether and how elderly health status is affected by FSP participation, food sufficiency and other determinants. To do so we must first ascertain (1) why so few needy elderly households choose to receive food stamps; (2) what determines their level of food insufficiency and finally; (3) how FSP participation and food insufficiency link to each other and then to health status. To meet our goal, we estimate and assess a unique econometric framework applied to an analysis database created specifically for this project. The analysis data are a subset of elderly households from the 2002 Health and Retirement Survey (HRS), consisting of those eligible for food stamps. State-specific eligibility criteria were obtained from the Urban Institute’s waiver database and from Center on Budget and Policy Priorities publications. The econometric model is structured in two steps. In the first, simultaneous multivariate Probit estimates of endogenous FSP participation and food insufficiency equations are estimated. From the results, we calculate predicted probabilities of participation and insufficiency for use in Step Two. This final step involves Ordered Probit estimation of self-reported health status. Because predicted variables from Step One are included as explanatory variables, we adjust the standard errors of the Ordered Probit estimates to allow for accurate hypothesis testing. We extend Murphy and Topel’s (1985) modification of standard errors for one predicted variable to handle two such variables. After correcting the standard errors, some coefficients lose their significance; most importantly, the positive coefficient for the probability of FSP participation. The significant coefficients that remain are: food insufficiency (+) income (-), widowed (+), Nonhispanic Black (-), exercise (-) and drink alcoholic beverages (-).