ELASTICITIES OF DEMAND FOR IMPORTED MEATS IN RUSSIA 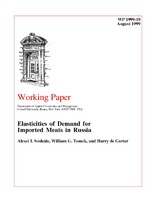 Elasticities of demand for meat imports in Russia are estimated using an AIDS model. The model differentiates among sources of imports as well as kinds of meat, but since the number of observations on Russian imports is limited, an improved block-substitutability restriction is introduced to conserve degress of freedom. The estimates of expenditure elasticities are positive for beef, pork, and chicken imported from western countries, and for beef and chicken, are larger than one. The expenditure elasticities are negative for beef and pork imported from former Soviet trade block countries. (Chicken is not imported from these countries.) Consistent with logic, the (compensated) cross-price elasticities indicate that products imported from different sources are substitutes. These estimates are perhaps the first available for the Russian economy, and not surprisingly, they indicate that declining real incomes in Russia mean decreasing meat imports from western countries.