An Empirical Evaluation of New Socialist Countryside Development in China 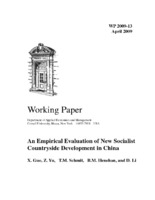 China prioritized a New Socialist Countryside reform policy in 2005 to address the growing disparities in incomes and living standards between rural and urban populations. These policies are evaluated to provide a base line index of reform concerning farmer, agricultural, and rural economic development. Aggregate index scores are computed to rank provincial progress. Rankings indicate the progression of rural economic reform is moderate, at best, and mostly isolated to well-developed eastern provinces. Reform growth is also uneven across similarly, rural provinces indicating a need for continued attention in these poorer areas. More importantly, as reform efforts continue, the empirical framework established can be used to track relative performance over time.