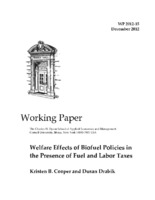 A tractable general equilibrium model is developed to analyze the welfare implications of a biofuel blend mandate and consumption subsidy in the presence of pre-existing labor and fuel taxes. The tax interaction and revenue recycling effects are significant relative to the overall costs of the policies and to previous partial equilibrium studies. We estimate the welfare effects of removing a tax credit which is used in combination with a binding mandate, which mirrors the expiration of the U.S. blender’s tax credit at the end of 2011. Because the mandate was binding, removing the tax credit yields a net welfare gain of only $9 million, which is significantly less than the welfare gain of $357 million due to fiscal interaction effects. We find that the welfare cost of the blend mandate alone is $8.3 billion, which includes a tax interaction effect of $1.54 billion. We also find empirically that the tax credit is welfare superior to the mandate for a given level of ethanol consumption because the fuel tax is above the external costs of GHG emissions. This result is robust to the presence or absence of the labor tax.