The Shadow Economy in Post-Soviet Tajikistan 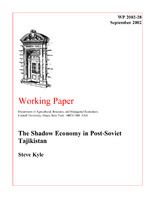 The existence of a “shadow economy” which is defined here as economic activity which is unrecorded in official statistics and hence not subject to normal taxation and regulation, is a phenomenon which has been much studied in both western industrial countries and in post- Soviet era countries of Eastern Europe and the former USSR. This paper provides rough estimates of the lower bound of the size of the unofficial economy in Tajikistan, the poorest of the former Soviet Republics. Using a household survey, base year estimates for 1999 are obtained. A series from 1991 to 2001 is constructed using a variant of the methodologies contained in Johnson, Kaufman and Zoido-Lobaton (1998) and Eilat & Zinnes (2000). It is found that shadow activities are likely to amount to close to half of all economic activities over the past decade, and that official GDP figures, which themselves contain an arbitrary adjustment for the value of shadow activities, are understated by a wide margin.