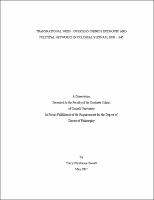 This dissertation is a study in ethnicity and transnational networks with the primary focus on the Chinese in Indochina, including Cochinchina, Cambodia, and Tonkin, which were under French colonial rule. It is the product of research undertaken at Hanoi's Vietnamese National Archives #1, the Vietnamese National Library in Hanoi, Saigon's Vietnamese National Archives #2, the Centre des Archives d'Outre-Mer in Aix-en-Provence, London's Public Record Office, and the Australian National Library and National Archives in Canberra. Access to these archives has allowed me to place overseas Chinese networks within the contexts of both Chinese and Southeast Asian history. As a result, this work has theoretical implications for transnational studies of borders inside and outside of Asia. This dissertation is the first transregional study of institutions organized by the overseas Chinese population of Indochina during the French period. These Chinese formed their original organizations in China, and then reached across the China-Indochina border, expanding across Indochina. In China, native-place ties inherited from their fathers bound them together, and after they reached Indochina, they established bases, most often in Saigon-Cholon, and then expanded into other cities and towns where their networks competed for commercial gain and political influence. Narratives of the lives, crimes, and political and economic ventures of scores of overseas Chinese living and working in Cochinchina, Tonkin, and Cambodia provide the backbone for my arguments. At the time, all of these places were under French colonial rule, and Chinese networks negotiated the pathways and pitfalls of French colonial law to achieve their own agendas and maintain multidirectional ties, not only with all of their branches in Indochina but with their native places in China as well. By concentrating on the points where Chinese, Vietnamese, and French interests intersected, I show how they cooperated and came into conflict with each other. Ultimately, I conclude that even while the French held official authority in the colonies of Indochina, Chinese transnational networks exercised unofficial control over decision-making, not only in commerce but also in the wider arenas of politics, law, and society as they pertained to local Chinese communities.