Media Studies 1932: Nancy Cunard in the Archive of Claude McKay 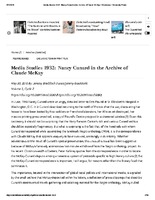 This essay examines the 1931-1933 correspondence of Claude McKay and Nancy Cunard, apparently the only surviving set of letters that document the composition of Cunard's Negro anthology (1934). The few scholars who have read the letters tend to emphasize the vehement dispute that terminates it. I am concerned instead to account for the nature of McKay's interest in and enthusiasm for Cunard's project, which occupies the great majority of his letters. This is strikingly emblematized by the small archive of international press clippings about Cunard and the making of the anthology, which McKay was able to compile in Morocco, and then send to Cunard in New York and London. The clippings are evidence of the changing technological conditions during these years (the expansion and consolidation of wire services for instance), which distributed modernist and political culture on an increasingly global scale, enabling transnational affiliation as well as transnational surveillance. Each of those transnationalisms is discernible in McKay's reading of the international press coverage of Cunard. McKay, I argue, was interested in Cunard as a media phenomenon, and in her attempt to translate her iconic celebrity into a political force; his understanding of the representational game that had evolved around Cunard is confirmed by his proposal to contribute to her mythography with his contribution to the Negro anthology.