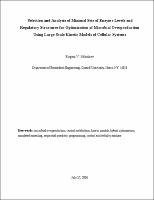 We introduce a hybrid deterministic/stochastic optimization modeling framework to identify minimal sets of enzyme levels and enzyme regulatory structures to meet significant overproduction requirements using large-scale kinetic models of microbial metabolism and essential protein machinery. Specifically, a simulated annealing algorithm is used to navigate through the discrete space of enzyme levels and regulatory structures, while a sequential quadratic programming method is utilized to identify optimal enzyme levels and regulatory kinetic parameters. The framework is demonstrated on a large-scale and chemically-detailed kinetic model of central metabolism in Escherichia coli (wild-type strain W3110) for the optimization of the glucose uptake through the phosphotransferase system (PTS) and serine biosynthesis. Computational results show that by optimally modulating enzyme levels and carefully altering enzyme regulatory properties, a stable 8-fold increase in the PTS uptake rate and a stable 22-fold increase in serine biosynthesis can be achieved. Importantly, substantial improvements in the targeted fluxes can be predicted by manipulating only small subsets of enzyme levels and regulatory structures. For example, the modulation of only three enzyme levels leads to a flux increase, which is almost 50% of the best predictions, and the manipulation of only six enzyme levels already leads to a flux increase of 80% of the best predictions. Remarkably, by optimally modulating 10 enzyme levels, the total central metabolism's enzyme overexpression capability is reached and any further increase in the targeted fluxes can be only possible if the pathway regulation is additionally altered, though at the expense of the loss of the pathway's steady state stability properties (i.e., no steady state can exist or oscillatory regimes may be encountered). The developed framework has also demonstrated a strong synergism between the redesign of control architectures for tightly regulated reaction steps (e.g., phosphofructokinase) and the overexpression of those enzymes which lack any type of regulatory properties (e.g., glyceraldehyde-3-phosphate dehydrogenase). Although the nonlinear optimization predictions are found in a good agreement with Metabolic Control Analysis (MCA) and large control coefficients can be indicative of the corresponding "rate limiting" enzymes and critical feedback regulatory parameters, the non-linear stable optimization predictions could not be found from the MCA alone. The proposed optimization framework thus provides a new versatile modeling strategy and computational tool for systematic optimal elucidation of minimal sets of controlling enzymes and their critical regulatory properties with broad implication in biotechnological studies.