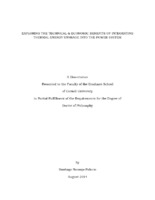 In recent years, electricity system operators have recognized the important role that demand-side resources can play in energy and ancillary services markets. As demand-side agents enter these markets, there is growing interest in energy storage technologies to induce flexibility in electric loads. Due to its low cost relative to electrochemical energy storage, thermal energy storage (TES) is a particular focus in the buildings sector. This thesis presents three interrelated projects that explore the economic and technical benefits that TES, when properly operated, can provide to building owners, distribution utilities, and power system operators. The first project examines the potential of large-scale TES deployment to reduce power system costs in a two-settlement wholesale energy market. I investigate the particular example of shifting cooling loads in the New York State power system on a hot summer day. By solving the system operator’s global optimization problem using heuristic methods, I find that TES can reduce both steady-state and transient system costs. TES enables these cost reductions by flattening the system load and reducing generator ramping. The second project develops a platform that, for the first time in the literature, shows how TES can be used to alleviate power system capacity constraints during critical peak events. This is accomplished by using a set of rate structure packages (RSP) to minimize end-user electricity demand during critical times through optimizing TES operation. Using this platform, I investigate the effect of 42 unique RSP on TES operation and building energy consumption, as well as the end-user’s electricity costs and the utility’s costs of operation. Each of these RSP consists of: a seasonal time-of-use electricity rate, a critical peak electricity rate, and a demand response payment level. By simulating building operation under each RSP, I find that there is a set of optimal RSPs that encourage end-user participation without penalizing inflexible loads with excessive critical peak rates. In the third project, I develop an optimization and simulation platform that, for the first time in the literature, demonstrates the feasibility of using TES to provide spinning reserves. Using this platform, I show that demand-side resources can gain substantial financial benefits by participating in spinning reserve markets, and that capacity payments constitute the majority of these benefits. I then discuss the increase in demand for spinning reserves that power systems will likely see as extreme weather events become more frequent and as more renewable generation is deployed. I conclude by highlighting the important role that demand-side resources can play in meeting future demand for spinning reserves.