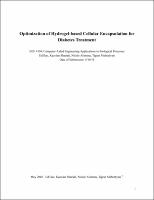 Cell encapsulation is an efficient and cost-effective treatment for a variety of endocrine and hormonal disorders. The use of cells to deliver therapeutics is an especially desirable means drug delivery may be achieved, and serves to eliminate issues associated with other methods of drug delivery. The application of these methods to Type 1 Diabetes is a promising area of research, and may potentially be a functional cure. As the use of cell encapsulation devices vary, the need for parameter analysis and optimization for a diabetes-focused encapsulation devices becomes apparent. More importantly, the potential complications faced by effective cell encapsulation devices must be considered in design. The study attempted to observe the selectivity of transfer of chemical species pertinent to a pancreatic islet cell encapsulation device. The complications associated with the availability of such chemical species were also modeled with respect to variation in the parameters of the device. The Type 1 Diabetes model was designed with a cylindrical geometry, and three primary layers consisting of an islet cell containment core, a nanofiber(nylon) mesh layer, and an outer hydrogel layer. The impacts of glucose and oxygen availability on insulin secretion were of specific concern to the study. The hydrogel must be appropriately permeable to the flow of glucose, insulin, and oxygen. These concerns were addressed and studied through the use of COMSOL Multiphysics , a commercial analysis software. A two-dimensional axisymmetric model was implemented in order to observe the diffusivity-driven mass transfer of chemical species, and their associated reactions. The computational modeling approach was chosen in order to study the effect and impact of parameter variation on the efficacy of such a device, and to computationally optimize these parameters. A steady-state study was conducted on the model with concentrations of blood glucose and oxygen as boundary conditions, as well as an insulin concentration of zero at the outermost boundary assuming total insulin removal. Encapsulated islets under low oxygen conditions showed a loss of viable tissue, and the development of a necrotic core. Using a critical oxygen concentration of 0.001 mM in conjunction with implementing parameter variation against standard model conditions, the critical radiuses before cell death were calculated for several models. For the multiaxial transfer device, the critical radius before the presence of any cell death or necrosis was determined to be 0.00172 m after identifying the key modulator of cell life and insulin production to be oxygen. The same process was repeated with a model in which mass flux was zero at both ends of the device, resulting in a significantly lower critical radius of 0.00122m. Additionally, the computations revealed that insulin concentrations were not strongly modulated by glucose availability. The production of insulin is more heavily influenced, within the steady state conditions after a meal, by local oxygen concentrations. Iterations of the model were repeated with various hydrogels, nanofiber widths, and islet loads in order to identify gelatin as the most efficient hydrogel for insulin flux, and dispersed islets as being necessary for optimal insulin secretion. Validation of the model and results were conducted through comparison to experimental information, as well as through model C which validated the physical approximation of islets being homogeneously distributed within the core. As the efficacy of cell-based diabetes treatments is more seriously considered, the need becomes apparent for the development of computational model such as those implemented in this study, which reveal the impacts of parameters and designs chosen on device efficiencies . Such a model may be implemented in future research of alternate encapsulation methods for Type 1 Diabetes, as well as other disorders as they pertain to the endocrine and hormonal systems. Approaches to address these directional shifts may involve the consideration of additional parameters and domains.