The Records of the Albany Commissioner of Indian Affairs, 1678-1755
JavaScript is disabled for your browser. Some features of this site may not work without it.

The Records of the Albany Commissioner of Indian Affairs, 1678-1755 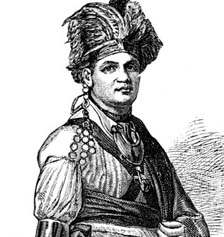 Cornell University Library in association with Professor Jon Parmenter of the Cornell University History Department is providing digitized and transcibed Native American manuscript records. These materials are from the records of the Albany Commissioner of Indian Affairs and covers the period of 1678-1755.

The image displayed is of Thayendanegea or Joseph Brant (1743 - 1807). Joseph Brant was of the Wolf Clan of the Mohawk Tribe. He was the most well-known Native American of his generation who allied himself closely with Great Britain. He met many important people of his time including George Washington and King George III.

Joseph Brant became a prominent political and military leader of the Iroquois League. He was helped by Sir William Johnson, the British Indian agent of the province of New York and his brother-in-law.

Transcripts of these records can be found at https://albanyindiancommissioners.com.