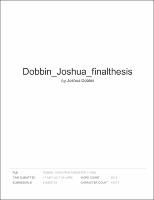 The hippocampus has been shown to play a crucial part in context encoding in rodents. However, the mechanisms by which the hippocampus affects contextually cued behavior have yet to be fully elucidated. In this study, I investigated the role of the ventral hippocampus (vHPC), as well as this region 's interplay with the anterior olfactory nucleus (AON), in a contextually cued odor discrimination task. Rats were presented with two cups of distinct odorized digging media (Odor A and Odor B). This task was performed in two different chambers -in one chamber, Odor A was rewarded with a buried sucrose pellet, and Odor B was rewarded in the other chamber. In a single session, rats would perform trials in both chambers in an order determined by a pseudorandom list. Subjects had to use context information to inform odor choice, and a subject was deemed to make a correct choice if it dug first in the rewarded cup. Performance was measured by counting the number of correct odor choices a rat made in a session. Once rats performed consistently at criterion, they received a series of muscimol or saline infusions before subsequent sessions. Some rats received bilateral vHPC infusions, and other rats received vHPC and AON cross-infusions to functionally disconnect the two brain regions in both hemispheres. Based on prior research, I hypothesized that bilateral v HPC inactivation would eliminate the subjects' ability to use context as a retrieval cue. I also hypothesized that the cross-infusions would have the same effect -these rats would lack a functional connection between the vHPC and AON in both hemispheres. These hypotheses were supported by the data, suggesting a critical role of the vHPC and its connection with the AON in a circuit controlling contextually cued odor discrimination.