Egyptian Labor Corps: Logistical Laborers in World War I and the 1919 Egyptian Revolution 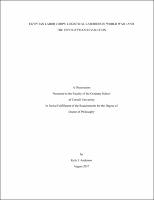 This is a history of World War I in Egypt. But it does not offer a military history focused on generals and officers as they strategized in grand halls or commanded their troops in battle. Rather, this dissertation follows the Egyptian workers and peasants who provided the labor that built and maintained the vast logistical network behind the front lines of the British war machine. These migrant laborers were organized into a new institution that redefined the relationship between state and society in colonial Egypt from the beginning of World War I until the end of the 1919 Egyptian Revolution: the “Egyptian Labor Corps” (ELC). I focus on these laborers, not only to document their experiences, but also to investigate the ways in which workers and peasants in Egypt were entangled with the broader global political economy. The ELC linked Egyptian workers and peasants into the global political economy by turning them into an important source of logistical laborers for the British Empire during World War I. The changes inherent in this transformation were imposed on the Egyptian countryside, but workers and peasants also played an important role in the process by creating new political imaginaries, influencing state policy, and fashioning new and increasingly violent repertoires of contentious politics to engage with the ELC. The institutionalization of the ELC thus entailed a re-articulation of the networked space of the British colonial state in Egypt, which would have important implications for Egyptian history. In particular, I track how the spatial transformations necessary to recruit, transport, and deploy roughly half a million workers and peasants from all corners of Egypt in the ELC structured mass politics during in the 1919 Egyptian revolution. Focusing on the role of ELC laborers in the broader revolutionary process can serve to check the validity of the common belief that the centralized nationalist movement coordinated the rural uprisings that spread throughout the countryside in March 1919. I argue that the cause of these uprisings cannot be reduced to sympathy with the urban-based nationalist movement. I find that recruitment for the ELC engendered a variety of violent demonstrations in the countryside as early as May 1918, and played an important role in motivating anti-British violence during the 1919 revolution, over and above any sympathies to the nationalist movement.