Perils of Transitive Trust in the Domain Name System 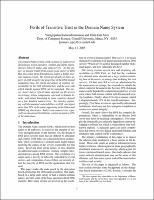 The Domain Name System, DNS, is based on nameserver delegations, which introduce complex and subtle dependencies between names and nameservers. In this paper, we present results from a large scale survey of DNS that shows that these dependencies lead to a highly insecure naming system. We report specifically on three aspects of DNS security: the properties of the DNS trusted computing base, the extent and impact of existing vulnerabilities in the DNS infrastructure, and the ease with which attacks against DNS can be launched. The survey shows that a typical name depends on 46 servers on average, whose compromise can lead to domain hijacks, and names belonging to some countries depend on a few hundred nameservers. An attacker exploiting well-documented vulnerabilities in DNS can hijack more than 30% of the names appearing in the Yahoo and DMOZ.org directories. And certain nameservers, especially in educational institutions, control as much as 10% of the namespace.