Retributive Caution, Guiltworthiness, and the Rationality of Anger 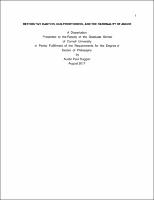 On a basic desert conception of moral responsibility, any agent who freely, knowingly, and inexcusably acts immorally deserves a negative response just because s/he so acted. The predominant view is that blame is the negative response at issue. I argue that, even if we know that an agent has freely, knowingly, and inexcusably acted immorally, there is no reliable evidence that this fact alone renders the agent deserving of blame or other form of censure. We ought, then, to be skeptical about the desert of blame, and in turn forego blaming or censuring on that basis. I argue that this does not entail that agents are never morally responsible for immoral acts. Some agents may still deserve to feel guilt for their immoral acts, and it is this guiltworthiness that explains their moral responsibility. Moreover, I argue that skepticism about the desert of blame does not impugn the rationality of our blaming emotions. These views stand in stark contrast to extant views concerning blame and moral responsibility, and offer solutions to heretofore unresolved issues in ethics.