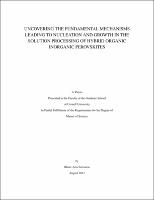 Power conversion efficiencies of hybrid organic-inorganic perovskite (HOIP) solar cells now rival those of traditional silicon-based solar cells. Unlike silicon, HOIPs can be processed directly from solution, leading to low-cost and energy-efficient fabrication. While many studies have shown that the composition of these solutions ultimately affects the cell’s efficiency, the underlying physics governing the solution processing of the final crystalline product is very poorly understood and under-investigated due to the overwhelming complexity of the system. Despite the importance of understanding this correlation between processing and performance, the many choices of species and the processing “recipe” cannot be fully explored by either an experimental or a computational trial-and-error approach. We need to understand the key rules that underlie the complexation and nucleation processes to help guide this exploration. To start this process, we have performed accurate ab initio Density Functional Theory (DFT) calculations of important moieties in solution and, critically, identified the Mayer Bond Order (MBO) as a metric of complexation effectiveness in solutions containing the building blocks of lead halide salts. We provide clear evidence, through a proof of concept involving the additive THTO, that the high bonding power and Lewis basicity, measured by the MBO, provides a computationally efficient and accurate way to determine solvent performance and screen currently unused experimental solvents for their effectiveness, hence precluding the need for experimental trial-and-error. For the second step in the process, determining the mechanism of complexation that leads to perovskite nucleation, we have studied the effect of the bath solvents and anti-solvents on the complexation of lead salts to the chaperone cation (methylammonium, formamidinium or cesium) in solution. Using quantum mechanically modeled systems, we have found that, for each choice of lead-halide (iodine, bromine, chlorine), paired with one of these three cations, the permittivity of each solvent or anti-solvent has a direct effect on the binding energy between the PbX3 and B-site cation motifs. This work shows that the solvating strength of the bath solvents hinders the formation of the smallest perovskite building blocks (PbX3M), while the use of the anti-solvents does not. Specifically, our ab initio calculations showed that the binding energy between the two major building blocks that go to make up the final perovskite crystal structure can be increased using a relatively low dielectric solvent. The goal of solution processing is, first, to dissolve the lead salts, and, second, to allow nucleation to occur in solution. Our work suggests that these two concurrent events can be controlled to maximize the objectives of each event over the course of the solution processing cycle to achieve a high nucleation density and large-grain crystal growth.