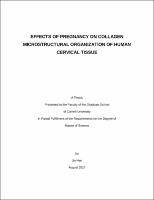 BACKGROUND The cervix shortens and softens as its collagen microstructure rearranges (termed “remodeling”) in preparation for birth. Altered cervical tissue microstructure can contribute to premature cervical dilation and delivery. To date, the changes in cervical microstructure during pregnancy are poorly understood, and a quantitative comparison of collagen distribution and orientation within the cervix at the micron-scale is lacking. OBJECTIVE: To investigate the local microstructural changes associated with pregnancy and anatomic location, we quantitatively characterized the orientation and spatial distribution of collagen throughout human cervical tissue using second harmonic generation (SHG) microscopy. STUDY DESIGN: Using institutional review board-approved protocols, pregnant and non-pregnant women < 50 years old undergoing hysterectomy for benign indications were consented. To characterize cervical microstructure throughout the entire cervix, cervical slices were obtained from the upper, middle, and lower cervix. We imaged samples excised at different anatomical locations using SHG microscopy and implemented a 2D autocorrelation method to quantify the microstructural orientation and distribution of collagen fibers. The effect of several obstetric history variables on collagen microstructure was examined: pregnancy status, parity, and number of vaginal deliveries. Student’s t-tests or Wilcoxon rank-sum tests and one-way ANOVA were used to examine differences across groups, and linear regression were used to examine relationships among variables. RESULTS: Cervical tissue was collected from 4 pregnant and 14 non-pregnant women. Collagen fibers of cervical samples from pregnant women are more disordered on the 90 μm-length scale, while cervical tissue from non-pregnant women have an 8% higher degree of orientation on this length scale. Collagen alignment trended toward decreasing as parity increases. Cervical collagen alignment was variable near internal os, and less variable near external os. Cervical tissue located at the inner radial zone (near the inner canal of cervix) are more homogeneously distributed than tissue located at the outer radial. Two regions with different collagen distribution characteristics were found. Cervical tissue at region 1 (anterior and posterior quadrants at outer radial) are more heterogeneously distributed than other regions. CONCLUSION: Our findings suggest that the collagen alignment and distribution of human cervical tissue on the 90μm-length scale vary throughout cervix. Cervical collagen alignment was also found to be related with pregnancy status and parity of the patient. This study deepens our understanding of specific microstructural cervical changes in pregnancy and contributes to further investigation of potential mechanisms for normal and premature cervical remodeling.