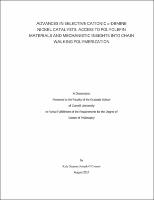 Karl Ziegler and Giulio Natta’s landmark discovery of heterogeneous catalysts for olefin polymerization ushered in a new era of polymer chemistry. Materials such as polyethylene, isotactic polypropylene, and polyolefin elastomers were commercialized from their new technology and have drastically impacted modern life. Following Ziegler and Natta’s discovery, researchers made significant strides in developing single site homogenous catalysts that exhibit superior control over polymer molecular weight, tacticity, and block architecture. One class of homogenous catalysts that has received much attention over the past two decades are the α-diimine late metal systems based on nickel and palladium. A unique mechanistic feature to late metal catalysts is a phenomenon known as “chain walking,” where β-hydride elimination and metal-hydride reinsertion events move the catalyst along the growing polymer chain. This mechanism allows for a wide variety of architectures to be accessed from simple olefin feedstocks. Chapter one discusses the development of late metal complexes, focusing primarily on regioselective nickel systems that can “chain-straighten” α-olefins into linear “polyethylene,” and understanding the polymerization mechanism. Chapter two focuses on the utilization of a 2,1-regioselective nickel complex capable of forming block copolymer thermoplastic elastomers from ethylene and α-olefins. The effect of block architecture, polymerization solvent, and the ratio of α-olefin versus ethylene incorporation on the resulting polymer tensile properties is studied. The mechanism behind the loss of elastic recovery after strain deformation is also discussed. Chapter three discusses the mechanistic analysis of branch incorporation through the study of 13C-labeled poly(α-olefins) produced using a variety of α-diimine nickel catalysts. A mathematical model is developed to deconvolute and quantify the resulting spectra. Eight unique insertion pathways are identified, quantified, and discussed. The effect of catalyst and polymerization conditions on the ratios of the eight insertion pathways are studied. Chapter four focuses on the development and use of α-diimine nickel catalysts capable of the regio- and isoselective polymerization of 1-butene, yielding new semicrystalline polyolefins. The effect of catalyst and polymerization conditions on the properties of the resulting polymer is studied. The rationale for the observed isoselectivity is also discussed.