CULTURAL MEANING AND DEFINING A POLICYMAKING SITUATION: MAKING SENSE OF THE POLICY RESPONSE TO THE FINANCIAL CRISIS 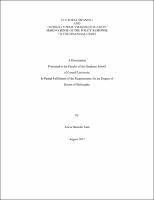 CULTURAL MEANING AND DEFINING A POLICYMAKING SITUATION: MAKING SENSE OF THE POLICY RESPONSE TO THE FINANCIAL CRISIS Alicia Danielle Eads, Ph.D. Cornell University August 2017 Faced with a collapsing housing market, which was disrupting financial markets via “toxic” mortgage-backed securities, U.S. policymakers acted aggressively to stabilize financial markets but remained circumspect about intervening in the housing market. Academics and policymakers alike acknowledge that the federal policy response to the housing market collapse was a “gross inadequacy.” This dissertation examines why that was so, identifying variations in key policymakers understandings and expectations of mortgage borrowers and mortgage lenders. The cultural tension was not over the causes of the crisis, as might be expected. Policymakers quickly sorted out the basic narrative of the subprime expansion, loose underwriting, and ubiquitous mortgage-backed securities. Instead, the relevant cultural meanings that implied vastly different policy responses were more fundamental: a construction of mortgage borrowers and lenders. Are mortgage borrowers rational investors who will walk away from an underwater mortgage? Or are they struggling homeowners, taken advantage of by predatory lenders? In one of these constructions it makes sense to commit tax dollars to the problem while in the other it would be irresponsible. The dissertation also analyzes the construction of the foreclosure crisis within U.S. states, a context that allows for statistical analysis of the relationship between cultural meaning and policy adoption. Some states’ media outlets discussed the foreclosure crisis as a market phenomenon while others discussed it as the result of predatory lending practices. Applying Latent Dirichlet Allocation topic modeling to text from 2,600 newspaper articles, I measure the multiple cultural meanings that the crisis assumed in different states. Results from event history analyses show that particular cultural meanings predict the adoption of aggressive foreclosure prevention policies, adjusting for other factors such as the extent of the housing market collapse and political party control of state legislatures. Finally, this dissertation also considers the relationships among wealth, debt, and family stability. The policies implemented in response to the recent crisis influenced which types of assets recovered value following the Great Recession, thus affecting household wealth and the longstanding trend of rising wealth inequality. The crisis policies also allowed a "debt overhang" to remain among millions of households. The family is a key micro-level institution that experiences and transmits the inequality effects of macro-economic policies. Analyses in this part of the dissertation use data from the 1996 to 2008 panels of the Survey of Income and Program Participation to offer a comprehensive account of how wealth and debt relates to family stability. The findings include that, as anticipated, higher holdings of liquid and illiquid assets are associated with a decrease in the likelihood of dissolution. During the Great Recession, median wealth in the U.S. dropped by 44 percent, exposing more families to the risk of dissolution. Indeed, this analysis shows that couples were at 54 percent greater risk of dissolving their unions during the recession years. The analysis also shows, perhaps contrary to intuition, secured debt, such as mortgage debt, is associated with a decrease in the likelihood of dissolution.