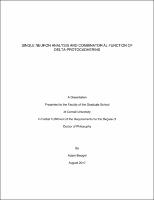 The average adult human brain consists of approximately 86 billion neurons and roughly 14 x 1015 synapses. How this marvelously complex system is achieved with great precision throughout development is largely unknown. To date, roughly 200 genes have been identified that play direct roles in aspects of neural wiring. How can such a small number of genes specify such a vast amount of instructions for neural wiring? It is clear that individual neurons must express these genes in combinations to greatly expand their utility towards specifying neural wiring to such great depths of complexity. However, two major roadblocks have prevented an understanding of how this occurs. First, the nature and extent of these combinations have not been defined, and so the basic aspects of combinatorial expression such as the depth and range of possible combinations are unknown. Improving our understanding in this respect will allow us to begin addressing the second limitation, which is understanding what the combinations functionally achieve for any given neuron. To address the first limitation, new approaches that can profile gene expression in single cells can be utilized to define the combinations. To address the second limitation regarding function, new complementary approaches need to be developed. For example, to study how a gene family works together, first the function of its individual members on neuronal behavior need to be defined. Next, the effect of expressing multiple family members needs to be tested, until an understanding of the combinatorial functions within this gene family becomes apparent. Finally, the combinations of this gene family could be expanded and integrated with different genes or gene families to a broader understanding of combinatorial function. The aim of this thesis is to explore this concept by studying one small gene family of cell adhesion molecules, the 𝛿-protocadherins. In Chapter 1, an overview of the complexities of neural wiring, the types of molecular cues that provide instructions, and the importance of understanding their functions in combinations are discussed. In Chapter 2, a single-cell gene expression analysis method is developed and used to define the extent to which the 𝛿-protocadherins are expressed in combination in single olfactory sensory neurons. In Chapter 3, the consequences of combinatorial 𝛿-protocadherin expression on their adhesive functions are studied, and a simple model is proposed that explains combinatorial adhesive specificities based on differential apparent affinities, and the relative proportion of surface expression of each gene. Finally, in Chapter 4, I explore how the model could be extended and integrated with other protocadherins and to create a larger model that could encompass the entire cadherin superfamily.