Generation of Femtosecond Pulses at New Wavelengths in Fiber Lasers 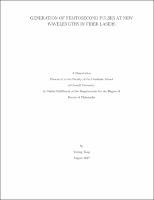 The advancement of ultrafast laser sources has enabled both new discoveries in fundamental research and the development of many practical applications, such as nonlinear microscopy, biomedical imaging, micro-machining, laser surgery, etc. Among the light sources, solid-state laser systems, such as Ti:sapphire lasers, have long served as the workhorses to provide the femtosecond pulses with high peak power and average power. As versatile as they are, the accompanying prices to pay are the bulky size, high cost, requirement for water-cooling and high sensitivity to alignment, which are all impediments for their operations outside the laboratory environments. Rare-earth doped fiber lasers come naturally with the advantages of being alignment-free, compact and possessing large surface-to-volume ratio for efficient heat dissipation at low costs. Single mode fibers provide nearly perfect gaussian beams for applications. Starting from the year of 2006 when the all-normal dispersion fiber lasers were discovered, researchers have devoted great efforts to studying nonlinear pulse evolution and ultrashort pulse generation in fiber lasers with high energy and peak power. Multiple novel pulse evolutions have been thoroughly explored, including dissipative soliton, passive self-similar, amplifier similariton and extended self-similar evolution. The performance of fiber lasers have also been boosted up to the comparable level as that of the Ti:sapphire lasers. With all these pulse evolutions and mechanisms studied and well understood, there is still work to be done about fiber lasers, such as the exploration of femtosecond pulse generations in the few-cycle regime and at other new wavelengths. The study of few-cycle pulse generation directly from fiber oscillators is first explored in an erbium laser with comb-like dispersion decreasing fiber, based on the idea of the extended self-similar evolution. Most of the fiber laser developments have been focused on using the gain medium of erbium and ytterbium with emission peaks around 1030 nm and 1550 nm. Thulium (Tm) doped and thulium-holmium codoped fibers emit light covering 1.7 to 2.1 um with a 100-nm wide gain bandwidth, which opens the door for many other applications. The benefits of operating Tm fiber lasers with net normal dispersion cavities are explored in this thesis. A Tm-doped fiber laser with hybrid pulse evolution with elements of self-similar evolution is demonstrated, with a 4-fold improvement in peak power over previous results. Similar thoughts can be applied to erbium doped ZBLAN fiber lasers operating at 2.8 um, at which wavelength only soliton lasers have been realized. Simulations predict promising results in cavities with dispersion management and some initial experimental results are presented. To further pursue the femtosecond pulse generation over 3 um into the mid-infrared region, a fiber-based laser system employing the soliton self-frequency shift in fluoride fibers is investigated. Soliton pulses with 100-fs duration, nanojoule-level energies are generated, with wavelength tunable from 2-4.3 um. Compared with previous reports, the pulse energies are two orders of magnitude higher and the range of wavelengths is extended by 1000 nm. Finally, future directions and the extension of the work in the thesis are discussed.