A Goddess for the Second Millennium: Transgression and Transformation in the Hindu Tantric Worship of Tripurasundar? 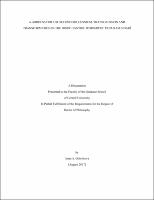 In religious and secular spaces, rituals structure time and place, distinguish the special from the mundane, and shape individual and communal identities. But what makes rituals endure? Why do some ritual systems vanish, while others thrive? And what allows traditions to adapt to cultural change? Reading tantras and commentaries “against the grain,” as products of historical actors, I have traced the early history of the cult of Tripurasundarī to answer these questions, highlighting innovation and continuity in ritual practice and doctrine. Analyzing the earliest texts relevant to the worship of Tripurasundarī, I find four distinct stages in its early development: the Nityā Cult, the classical or mature cult, the Kashmirian reinterpretation, and the south Indian exegesis. In the Nityā cult, the principal Goddess was surrounded by an unelaborated retinue of subordinate goddesses with Kāmadeva, the god of love, as her consort. The Vāmakeśvarīmata described the ritual configuration of the classical cult, including an addition of a vast retinue of subordinate goddesses within the Śrīcakra, the principal ritual diagram of this tradition. The classical cult also added a new system of tantric (non-Vedic) mantras and mudrās (ritual gestures) and Tripurasundarī became associated with Śiva. In the Yoginīhṛdaya, yogic and meditative practices were grafted onto the existing ritual and mantric system. Thirteenth-century exegetes further adapted this tradition to its new environments by reinterpreting it in light of Śaiva non-dualism and Pratyabhijñā philosophy in Kashmir. In south India, the exotericization and Vedāntization brought the cult of Tripurasundarī into the heart of Hindu temple worship, while the devotional (bhakti) practice of chanting carried its most treasured hymns to the forefront of private religious life. Four factors contributed to this success: the non-threatening and pleasing nature of Tripurasundarī and her associations with love magic; the visually stunning Śrīcakra and the complementary mantra system, both viewed as exceedingly powerful; the tremendous range of practices from external ritual to yogic visualizations built upon a rich foundation of ritual and mantra system; and, finally, a history of creative and skillful exegesis, repeatedly adapting this tradition to its changing environments.