OPENING PANDORA'S BOX: CHARACTERIZATION OF THE DISTRIBUTION, AND ACTIVITY OF THE SALMONELLA CYTOLETHAL DISTENDING TOXIN AMONG NONTYPHOIDAL SALMONELLA SEROTYPES 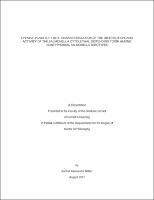 Salmonella enterica subsp. enterica is one of the leading causes of foodborne illness worldwide. Recently, genomic characterizations of S. Typhi, the causative agent of typhoid fever, identified a novel hybrid toxin which combines the active subunits of both the pertussis toxin and the cytolethal distending toxin, into one holotoxin which was called the ‘typhoid toxin’, for its hypothesized role in typhoid fever. However, the ‘typhoid toxin’ was later found to be encoded by several nontyphoidal serotypes as well, and therefore will be referred to as S-CDT (for Salmonella Cytolethal Distending Toxin). The overall goal of the work presented here was to characterize the ‘typhoid toxin’ encoded by nontyphoidal serotypes, including i) the distribution and conservation of S-CDT genes in common nontyphoidal serotypes, (ii) characterization of the activity and function of the toxin at the cellular level, and (iii) asserting which genes are essential for toxin activity in vitro. Among the nontyphoidal serotypes causing roughly 75% of human cases of salmonellosis in the US, genes encoding S-CDT were conserved in (50 out of 50 isolates screened) serotypes Javiana, Montevideo, and Oranienburg, while for serotype Mississippi, S-CDT genes were clade-associated. Alignment of amino acid sequences of S-CDT subunits demonstrated that these 4 nontyphoidal serotypes encoded an S-CDT with high similarity to the typhoid toxin encoded by serotype Typhi. Infection of eukaryotic cells with S-CDT-positive serotypes, but not S-CDT-negative serotypes resulted in activation of the DNA damage response, and a G2/M cell cycle arrest, both of which support that these serotypes produce an active toxin. This activity was dependent on CdtB, the active subunit of S-CDT which acts as a nuclease in vitro, as deletion of cdtB abolished the ability of the S-CDT positive serotypes to activate the DNA damage response. Similar to Typhi, deletion of toxin subunit genes cdtB and pltA abolished activity in vitro. In contrast, deletion of pltB, encoding the binding subunit, did not affect S-CDT intoxication, suggesting that either the trafficking or activity of S-CDT differs between nontyphoidal and typhoidal serotypes, or that the toxin uses an alternative binding subunit. Genetic screening showed that S. Javiana (a nontyphoidal serotype) encoded a gene, artB, with homology to pltB. Deletion of artB decreased, but did not eliminate, S-CDT activity in vitro, but deletion of both artB and pltB abolished S-CDT-induced activity, suggesting that at least one subunit is required for S-CDT activity in vitro. Strains harboring deletions in either ttsA or STY1887 did not have a significant effect on S-CDT-mediated intoxication, suggesting that they are not essential for activity in vitro. Importantly, this work provides experimental evidence that nontyphoidal serotypes not only encode a ‘typhoid toxin’ that is nearly identical at the amino acid level to the one encoded by S. Typhi, but that it is also functional in these serotypes. Furthermore, we provide evidence that S-CDT positive nontyphoidal serotypes significantly impact the outcome of infection at the cellular level. Taken together, these results suggest that S-CDT plays an important role in nontyphoidal salmonellosis, and provides one such ‘factor’ that may aide in current efforts to target specific serotypes for reducing the incidence of human cases of salmonellosis in the US.