THE BORDERS OF CONFLICT: THREE ESSAYS ON BORDER MANAGEMENT AND CONFLICT ESCALATION 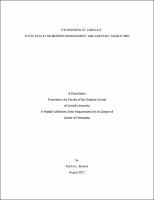 Why do some states escalate territorial disputes while other states ignore or actively resolve their territorial claims? Why do some states choose to diplomatically close their borders with a neighboring state, or to build a physical fence? Some states unilaterally close and reopen their borders multiple times during conflicts. Why do they pursue what appears on its face to be an inconsistent border management strategy? This dissertation addresses these questions. The first essay argues that differing domestic intuitions cause some states to view territorial conflict as either more or less threatening overall. A large-N analysis of all territorial disputes between 1945 and 2007 reveals that military regimes are especially likely to escalate territorial disputes, while personalist dictators are unwilling to do so for fear of emboldening coup-plotters. The second essay analyzes all border closures and border fence construction between 1980 and 2011. It employs an original dataset and large-N analysis to demonstrate that, contrary to previous research, civil wars cause states to alter their border management techniques. It further provides a unified theory explaining why states pursue short term strategies like border closures when faced with some threats, and build physical fences when confronted by longer term challenges. The final paper observes that diplomatic border closures are especially likely during civil wars, and analyzes the border opening and closing behaviors of neighboring states during these conflicts. It presents a game theoretic model to illustrate that this pattern of intermittent closure and opening occurs when a refugee-receiving state attempts to extort additional international aid from the international community by endangering refugees. It then analyzes the implications of these models on two cases: Tanzania during the Burundi/Rwandan conflict and Macedonia during the Kosovo war.