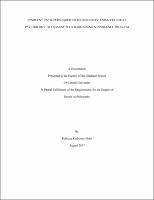 When people imagine a conviction occurring in the criminal justice system, they typically imagine a group of twelve jurors voting to convict a criminal defendant based on evidence that has been presented to them. However, the vast majority of criminal cases are resolved through plea agreements between the prosecution and a defendant, rather than a jury trial. Despite this, relatively little research has been conducted examining decisions to plead guilty, and the criminal justice infrastructure surrounding guilty pleas. In this thesis I draw on cognitive psychology and the law to identify and examine ways in which injustices may be arising in the current system with a focus on wrongful convictions arising from pleas where innocent defendants plead guilty. First, I show that due to a developmentally earlier cognitive processing style adolescents may be pleading guilty to crimes they did not commit more than adults, through making decisions that do not accord with values relating to guilt and innocence. Second, I show that the structure of the current plea system can lead to cognitive biases in plea decisions that are likely to influence innocent defendants more than guilty defendants, leading to innocent defendants pleading guilty at increased rates under predictable conditions. Finally, I show that current law creates a system in which it is sometimes desirable for innocent defendants to plead guilty, even where there is a low chance of conviction at trial. I draw on these three findings to make recommendations regarding the current plea system and relevant law.