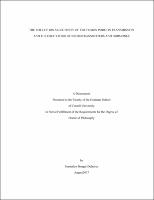 THE ROLE OF ION SELECTIVITY OF THE FUSION PORE ON TRANSMISSION AND THE EXOCYTOSIS OF NEUROTRANSMITTERS AND HORMONES Joannalyn Delacruz, Ph. D. Cornell University 2017 Healthy nervous system function depends on proper transmission. Synaptic transmission occurs by the release of transmitters from vesicles that fuse to the plasma membrane of a pre-synaptic cell. Regulated release of neurotransmitters, neuropeptides, and hormones occurs by exocytosis, initiated by the formation of the fusion pore. The initial fusion pore has molecular dimensions with a diameter of 1-2 nm and a rapid lifetime on the millisecond time scale. It connects the vesicular lumen and extracellular space, serving as an important step for regulating the release of charged transmitters. Comprehending the molecular structure and biophysical properties of the fusion pore is essential for a mechanistic understanding of vesicle-plasma membrane fusion and transmitter release. Release of charged transmitter molecules such as glutamate, acetylcholine, dopamine, or noradrenaline through a narrow fusion pore requires compensation of change in charge. Transmitter release through the fusion pore is therefore an electrodiffusion process. If the fusion pore is selective for specific ions, then its selectivity will affect the rate of transmitter release via the voltage gradient that develops across the fusion pore. The elucidation of these mechanisms can lead to a better understanding of nervous system cell biology, neural and endocrine signaling, learning, memory, motor control, sensory function and integration, and in particular synaptic transmission. This investigation can advance our understanding of neurological disorders in which noradrenergic and dopaminergic exocytosis is disturbed, leading to neurological consequences of developmental disorders, epilepsy, Parkinson’s disease, and other neurodegenerative diseases. Ultimately, understanding the role of selectivity in the fusion pore and its effects on exocytosis can contribute to the development of more effective therapies. This study investigates the selectivity of the fusion pore by observing the effects of ion influx and efflux through the fusion pore. The experiments reveal negatively charged transmitter release can occur through a fusion pore at larger conductance values, past a threshold range. Narrow fusion pores with lower conductance values favor cation selectivity, which would accelerate the release of positively charged transmitters such as acetylcholine in the neuromuscular junction. However, release of negatively charged neurotransmitters such as glutamate can occur if an expanded fusion pore mediates release of this fast major excitatory transmitter. The intention of this research is to expand our understanding of the nervous system, which can contribute to healthy shifts in our clinical and educational interventions that are commonly delivered.