LISTEN TO THE WORD MEANING OR THE VOCAL TONE: SENSITIVITY TO EMOTIONAL CUES AMONG EUROPEAN AMERICAN AND CHINESE CHILDREN 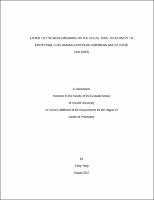 People from varied cultural backgrounds differ in their attention to particular aspects of emotional cues. Whereas semantic content explicitly expresses feelings, vocal tone conveys implicit information regarding emotions. This dissertation examined the attention to different emotional cues in European American, Chinese urban, and Chinese rural children. Participants were 121 European American, 120 Chinese urban, and 130 Chinese rural children (4-9 years old). Half were girls and half were boys in each cultural group. They played two computer games in which they listened to spoken words and judged the pleasantness of the word meaning while ignoring the vocal tone (Meaning game) or judged the pleasantness of the vocal tone while ignoring the word meaning (Tone game). Results showed that European American children paid more attention to word meanings than did Chinese children. In contrast, Chinese children, especially 8-9-year-olds, attended more to vocal tones than did their European American counterparts. The two groups of Chinese children performed similarly in the tasks in general. The results are discussed in terms of cultural similarities and differences in children’s emotion understanding, as well as for their practical implications in inter-cultural emotional communication.