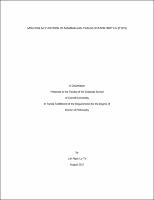 Translocator protein (TSPO), previously known as the peripheral benzodiazepine receptor (PBR), is a mitochondrial outer membrane protein highly conserved from bacteria to humans. TSPO is found to be upregulated in many pathological conditions, making it an attractive target for both diagnostic and therapeutic purposes in human medicine. However, the exact molecular function of TSPO remained unclear. For the past 25 years, TSPO was depicted to transport cholesterol from the cytosol to the inner mitochondrial membrane, the rate-limiting step in steroid hormone biosynthesis. Its critical role in survival and development was reinforced by a report that claimed TSPO knockout (Tspo-/-) mice were embryonic lethal. Therefore, there had been no genetic models to study the function of TSPO and all functional interpretations of TSPO were based on in vitro experiments using pharmacological tools. Our lab generated the first global Tspo-/- mice which surprisingly were healthy with no apparent abnormalities. Deletion of TSPO in different steroidogenic cell lines also did not affect cell viability. Furthermore, steroid hormone production was not affected in Tspo-/- mice or in steroidogenic cells lacking TSPO compared to the controls, indicating that TSPO is not involved in steroidogenesis. The stimulating effect of some TSPO binding chemicals on steroid hormone production that formed the early basis for linking TSPO and steroidogenesis was also found to be inaccurate. Using the TSPO knock out MA-10 Leydig cancer cells, I demonstrated that PK11195, the prototypical ligand of TSPO, could modestly induce steroid hormone production to the same extent regardless of the presence or absence of TSPO. This result indicated that the effect of PK11195 is nonspecific and not mediated by TSPO. My studies subsequently made the first correlation that TSPO is enriched in all tissues rich in lipid droplets including adipose tissues, suggesting a role of TSPO in lipid metabolism. Using both TSPO knockout MA-10 cells and Tspo-/- mice as the models, I demonstrated that deletion of TSPO increased mitochondrial fatty acid oxidation (FAO). However, co-immunoprecipitation result showed that TSPO did not have any interacting partners involved in FAO but formed a dimer, which could be induced by protoporphyrin IX (PPIX), the endogenous ligand of TSPO. Levels of free PPIX were found to be high in tissues rich in lipid droplets and directly regulated by TSPO. I also provided the first evidence for a novel function of PPIX in inhibiting FAO, which forms the basis for TSPO in regulation of FAO. Overall, my studies helped amend the current model of steroidogenesis by removing TSPO from its core machinery, and paving the way for the precise cholesterol transport mechanism to be identified. The function of TSPO in PPIX sequestering instead of steroidogenesis urges careful reinterpretation of previous studies using TSPO binding chemicals, and rigorous reevaluation of their applications in human medicine. Studying biological functions of PPIX is poised to uncover potentially new pathways with broad implications in biology, and remains a core topic for future investigation.