The Role of Polyphosphate Accumulating Organisms in Environmental Phosphorus Cycling 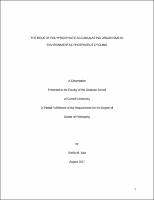 Phosphorus (P) is a limiting nutrient in freshwater ecosystems and excess P from anthropogenic sources impairs water quality. Strategies to manage P pollution depend on abiotic and well as biotic mechanisms. For example, no till farming practices physically reduce transport of sediment-bound P into nearby waterbodies and specialized wastewater treatment plants (WWTPs) utilize biological (i.e., microbial) mechanisms to remove P from influent waters. With respect to the latter, the main actors of these specialized WWTPs are a group of organisms known as polyphosphate accumulating organisms (PAOs). PAOs are well studied in the context of WWTPs and a limited number of studies have identified them in the natural environment. However, very little is known about their ecological role as well as their influence on P cycling and transport in natural systems. Therefore, the overall goal of this work was to expand our understanding of PAOs in soils and streams. We started this exploration with a review of PAOs in engineered and natural systems—we discussed knowledge gaps and ways studies from these distinct contexts may build on one another. This review also included a discussion of the potential role of PAOs in agricultural systems. We proposed studies to explore the impacts of PAOs in terms of major agricultural challenges and discussed how these studies may inform our understanding of PAOs in engineered and natural systems. Next, we conducted a laboratory experiment to explore the role of PAO-mediated P cycling in stream biofilms under alternating aerobic and anaerobic conditions. We demonstrated cyclical patterns of P uptake under aerobic conditions and release during anaerobic conditions, which is consistent with the known behavior of PAOs in WWTPs. We also verified larger percentages of cells with stored intracellular polyphosphate granules under aerobic conditions compared to anaerobic conditions, which we expected given our understanding of the PAO phenotype in WWTPs. However, we observed concurrent patterns in cation uptake and release, which may indicate abiotic precipitation/dissolution of P with these cations and/or biotic uptake/release of these cations to balance the negative charge of intracellular polyP. Next, we explored whether the soil wetness index (SWI), a static index used to predict landscape scale soil moisture patterns, can predict the occurrence of mobile forms of P as well as PAO associated functional genes (i.e., ppk1, ppk2, and ppx). We showed that SWI predicted mobile P (i.e., dilute CaCl2 extractable P) and there was a depletion of mobile P from wetter parts of the landscape. This is consistent with our expectations of PAO behavior; PAOs release mobile forms of P under saturated conditions that are transported off-site. More specifically related to PAOs, we found that SWI was not a good predictor of the relative abundance of polyP functional genes. We observed a general decrease in the relative abundance polyP functional genes versus mobile P concentrations in NY, was consistent with our hypothesis, but this trend was only statistically significant in the case of ppk2. In PA, the relationship between the relative abundance of polyP functional genes was not significant and general trends were inconsistent with our hypothesis. Therefore, these results suggest the limited role of PAO-mediated P cycling along the SWI gradients identified and the potential masking of PAOs by other P controls (e.g. landscape position and management). Future research may consider how the role of biotic and abiotic processes masks the role of PAOs in soil P cycling. These includes the impact of iron reducing bacteria or chemical iron reduction/dissolution with P along a SWI gradient. Despite this limited support for PAOs, we identified contigs harboring both ppk1 and ppx genes that were within the same phyla as known PAOs as well as many unstudied, putative PAOs. Last, we studied whether PAOs played a discernable role in P cycling associated with the decomposition of leaf litter in the stream and on the forest floor. We observed an increase in leaf P concentrations in the stream and a decrease in leaf P concentrations on the forest floor over time. Unexpectedly, we did not observe a concurrent increase in the relative abundance of PAO-associated functional genes over time in the stream. Rather these genes remained constant. ppk1 and ppx relative abundances also remained constant in the forest floor but the relative abundance of ppk2 genes increased over time. While these trends did not provide support for PAOs control on P cycling in leaf litter decomposition, we identified contigs harboring both ppk1 and ppx genes that were within the same phyla as known PAOs as well as many unstudied, putative PAOs just as we observed in the soil study. In the case of both soil and leaf litter experiments, future studies may consider using microscopy and molecular biology tools to verify whether putative PAOs exhibit the phenotype of PAO established in engineered systems. Overall, we found support for PAO-mediated P cycling in stream biofilms but only limited support for their impact on P cycling in soils along a SWI gradient as well as on decomposing leaf P patterns over time. We provided additional thoughts at the end of the review paper and in chapter five on how these studies can be modified to test for the potential role of PAOs in agricultural P management as well as the influence of hydrology and nutrient demand/availability on PAO-mediated P cycling.