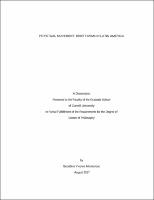 In this dissertation, I study the forms that attempt to capture experience in language. From the anecdotes that write a life, to the sentences that inscribe the language of prison-spaces, to the fictions that tell and retell old fables. Most importantly I examine the movement between these forms which are at once anachronic, synchronic and perpetual. In the first chapter, False Case: The Anecdote” I examine the desire that Macedonio Fernández, Jorge Luis Borges and Ricardo Piglia share for the anecdotal, which I define as the recording of an untraceable life. The writing of anecdotes I propose, consists of going to the limits of writing oneself in a single experience only to then erase oneself. In this “project” all three authors work with the anecdotal to challenge positions of authorship, to establish a community of writers who operate under the understanding that plagiarizing and copying are not a violation of the law but rather what brings them together. In my second chapter “Metaphysical Case: The Sentence,” I look at the ways in which an experience is captured in the form of a sentence as a specific form of the aphorism but also a grammatical and juridical structure for the inscription of order on a body. I analyze the works of Eduardo Lalo, Piglia and Borges, especially the texts written inside the prison. The prison, works both as the opening for a place to think, but also as a dead-end and a literal condemnation. For my third chapter “Fictional Case: The Fable” I study the way in which experience is organized in a causal way—as a sequence of events. Starting out from Aesop’s fables and biblical parables I look at the use of the form in a traditional sense and then I analyze how Augusto Monterroso and Juan José Arreola, revitalize and reappropriate old fables and parables in order to evaluate the causal construction of the form. For my last chapter “Perpetual Movement: The Flies” I see in Monterroso’s infinite collection of quotes about the fly the epitome of his whole literary project as well as the perpetual movement I trace throughout my chapters. By tracing this movement, I redefine what these “brief forms” have meant and still mean in the Latin American canon and I also propose them as critical maneuvers for any given text.