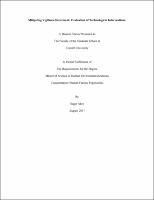 Abstract Objective: The objective of this research was to investigate whether administration of various technological interventions during rest breaks would improve performance on post-break trials of an abbreviated vigilance task. Background: While previous studies have indicated the efficacy of rest breaks for restoring vigilance performance, few studies have been conducted on potential mitigate strategies. Attention Restoration Theory, which proposes that performance on sustained attention tasks may be restored in some part by interaction with nature, provides a useful framework for investigating potential mitigation strategies, access to nature is limited in many work environments. Therefore, the current study examines whether natural stimuli presented via 4k UHDTV’s and virtual reality head mounted displays during short rest breaks would help to restore performance on subsequent tasks of an abbreviated vigilance task. Method: 45 Participants were asked to 2 trials of an abbreviated vigilance task (AVT) with a short 4-minute rest break in between the two trials. During the rest break, participants experienced one of three of the following conditions: 1) control: standard rest break with no stimuli; 2) Virtual Reality: rest break in which participants viewed a natural scene using a HMD 3) Television: rest break in which participants viewed the same scene on a UHDTV. Results: While no significant differences were found between groups regarding reaction time, participants in the virtual reality condition had significantly higher accuracy on post-break trials of the AVT when compared to control and television conditions. Conclusion: Using virtual reality during rest breaks as a medium by which to mitigate vigilance decrement may prove to be useful in reducing errors in semi-automated human machine systems. Application: Findings from the current study may be applied to a variety of industries in which human operators are tasked with maintaining prolonged periods of vigilance in the lookout for critical signals.