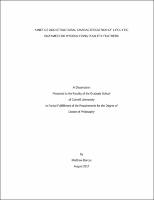 The processing of chicken feathers poses a challenge for the poultry industry. In the USA, near 9 billion chickens are slaughtered annually, which generates 5 million tons of recalcitrant feathers to manage. Enzymatic processing of feathers has promise to increase economic potential of the feathers, however, the abundant presence of lipids on feathers serve as a likely barrier. The genomes of a feather- degrading actinomycete and related microorganisms were mined for lipolytic genes candidates, which resulted in the identification of 16 active enzymes. SFK3309 from Streptomyces fradiae var. k11 was the top performing enzyme when tested against the synthetic lipase substrate p-nitrophenyl palmitate (pNPP). SFK3309 also displayed activity against feather lipids. Wax esters are the most abundant lipid class in feather lipids and a colorimetric assay was modified to perform kinetics experiments of SFK3309 against cetyl-palmitate. The Km and Kcat were calculated to be 850 μM and 11.63 s-1, respectively. Structural studies were undertaken for SFK3309, though diffracting protein crystals were unable to be produced. Thermal-shift assays suggest the presence of a hydrophobic patch on the protein surface that may interfere with protein being monodispersed in solution. Yet, some additives hold promise at stabilizing the enzyme in solution. A different lipase from S. fradiae var. k11, SFK3087, which lacked wax ester hydrolase activity, was explored using protein engineering to improve industrial characteristics of the enzyme and initiate work in expanding the substrate specificity and performance towards wax esters. The mutation Y83A increased the thermostability of SFK3087 by 3.76°C, but enzyme activity against pNPP dropped sharply. Saturation mutagenesis was performed on the serine at residue 119 and only large, aromatic residues maintained the same stability seen in wild type. The S119F mutation had a slight increase of thermostability (0.31°C), and an overall improvement in enzyme performance against pNPP, as represented by a Kcat/Km increase of 47%. A more drastic protein engineering scheme may be necessary to incorporate wax ester specificity in an enzyme. However, our work establishes feather-degrading microorganisms produce lipolytic enzymes capable of hydrolyzing wax esters and lays the foundation for further investigation on economic impact lipids have in feather processing.