BEYOND THE RECEPTIVE FIELD: AN ANALYSIS OF NATURAL SCENES AND A GEOMETRIC INTERPRETATION OF EFFICIENT CODING STRATEGIES BY THE MAMMALIAN VISUAL SYSTEM 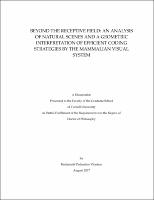 In biological and artificial neural networks the response properties of a visual neuron are often described in terms of a two-dimensional response map called the receptive field. This receptive field is intended to capture the basic behavior of a neuron and predict how that neuron will respond to a novel stimulus. However, the receptive field provides a good description of the neuron’s behavior only if the neurons in the network are linear. Neurons in an organism are in fact highly nonlinear, which means their responses are not completely described by their receptive fields. A number of studies have attempted to explain the properties of these neurons in terms of an efficient representation of natural scenes. In this thesis I will demonstrate the hidden computations and interactions a network of neurons performs which are not described by their receptive field. In the first study (Chapter 2), I address an aspect of natural scenes that is rarely considered in discussions of efficient coding. This study explores how the structural properties of an edge relate to the cause of the edge. I will show that neurons at the earliest stages of the visual system rather than just detecting edges (as depicted by their receptive fields) could potentially use these structural properties to identify the causes of an edge. The next three studies (Chapters 3,4, and 5), I explore the non-linear response of neurons. Most neurons in the visual pathway are nonlinear. To account for their behavior, we need an approach that goes beyond the classic receptive field. A variety of different approaches has attempted to explain this behavior. I present a geometric framework which attempts to provide a better description of the nonlinear response properties of neurons in the sparse coding network. I explore the geometric characterization of neurons in the efficient coding mechanisms like gain-control, a “fan equation” model for optimal sparsity, and a cascaded linear-nonlinear model. This geometric approach provides a deeper understanding of why sparse representations (including those of cortical visual neurons) give rise to nonlinear responses. The nonlinearities in artificial neurons are visualized and quantified in terms of the curvature of iso-response surfaces. I show that the magnitude of nonlinearities increases as the overcompleteness of the network increases, even though the linear receptive fields appears to be similar. In the next study (Chapter 6), I explore and define two forms of selectivity based on the curvature of the iso-response surfaces. The first form is “classic selectivity”, which is the stimulus that produces the optimum response from a neuron. The second form is “hyperselectivity” which is defined by the dropoff in response around the optimal stimulus due to the curvature of the isoresponse surfaces. I show that the hyperselectivity is unrelated to the classic selectivity. For example, it is possible for a neuron to be narrowly tuned (hyperselective) to a broadband stimulus. Further, I show that hyperselectivity in a neurons response profile breaks the Gabor-Heisenberg limits. Finally (Chapter 7), I show the effect of different learning rules, enforced by various cost functions used in the sparse coding network, on the response geometry of neurons. I demonstrate how different learning rules affect the interaction between the neurons in three-dimensional networks and the implications these findings have for a better representation of natural scene data in higher dimensions of image state space.