Forest Governance and Global Development: The Land Sparing Fallacy in Brazil and Indonesia 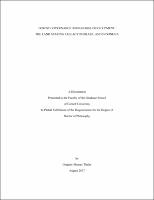 Tropical deforestation in Brazil and Indonesia is central to global trends of climate change, biodiversity loss, and agro-industrial expansion. Since 2004, new governance measures in Brazil have helped reduce deforestation in the Amazon by nearly 80 percent. Similar governance measures in Indonesia have failed to slow forest clearing, however. I explain this divergence through a comparative and ethnographic study focused on the programs of The Nature Conservancy (TNC), an international environmental organization. I conducted six municipal-level case studies of TNC projects and an organizational ethnography of TNC’s tropical forest programs, including 181 key-informant interviews and analysis of socio-economic and environmental datasets. I find that forest governance strategies in Brazil and Indonesia are strongly influenced by the ‘land sparing hypothesis,’ which holds that increasing agricultural productivity can spare land for conservation. In Brazil, government, corporate, and non-governmental actors have reduced deforestation through a land sparing model that links forest conservation to agricultural intensification, state-building, and socio-economic development. In Indonesia, by contrast, land sparing efforts have been stymied by government and corporate actors who extract resources for private gain. Overall, I show that deforestation reductions in Brazil favor agro-industry over small farmers, however, and are mostly canceled out by displacement of deforestation to extractive zones like Indonesia. I therefore argue that the land sparing model is a fallacy: it supports industrial expansion and state-building but displaces social and environmental degradation, producing negative global outcomes.