Mourning the Image, The Afterlife of Bodies in Contemporary Spain 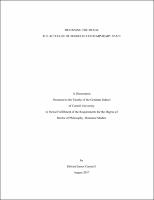 This dissertation examines categories of human remains germane to Spain’s mass grave exhumation phenomenon across three different media: photography, monuments and the plastic arts. In looking at spirit, memorial, and pictorialist genres of photography, each chapter explores the distinct relationship between the living and the dead as evidenced through physical spaces of interaction as well as visual sites of engagement. Beginning with the nation’s foremost specter, the first chapter examines portraits, correspondence, lectures, and the art installation, Everstill / Siempretodavía, which celebrates the lost poet-dramaturge, Federico García Lorca, at the family’s summer home in Huerta de San Vicente, Granada. These artifacts and exhibitions demonstrate a mutual desire that forecasts not only Lorca’s anticipation of his own demise and return, but also the public’s longing to grieve him somewhere on the landscape. Despite his lack of locatable material presence and inability to be mourned, Lorca’s spirit is enlivened and perpetuated through his cultural legacy within the spaces he inhabited while living. Moving from the missing singular body to the emergence of collective remains, the second chapter investigates contemporary excavations of Republican mass graves experiencing an active resignification in reburial. By mitigating their loss through documentary photography, I situate the practice of post-mortem portraiture within Clemente Bernad’s Desvelados as a funerary custom of recovery. In these visualizations of skeletal matter, the viewer mourns the dead by witnessing the history of violence inscribed on their remains and repatriates disappeared loved ones back into the community. From these previously concealed bodies in the midst of memorialization, the third chapter analyzes the single most visible site of death in Spanish memory politics, el Valle de los Caídos, the Fascist-Catholic monument-basilica-war memorial commissioned in 1940 to honor Francisco Franco’s fallen soldiers. Unlike the Civil War victims interred within the crypt of the Catalan spiritual community of Montserrat, a historic site of Republican violence against the Church and regional reconciliation, the assembled components of el Valle deter the prospect of national reconciliation. Foreclosing familial mourning of the dead, this composite site gestures to the authorial mark of the dictator enshrined within the floor of the basilica.