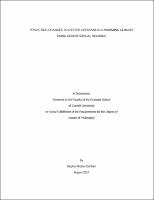 The threat of anthropogenic impacts to nature has been growing for centuries and has reached a point where many scientists believe we are causing a sixth mass extinction and that status quo carbon emission levels will lead to dangerous climate change. This realization has sparked increasing efforts to restore and conserve ecosystems and the biodiversity they support. Given that the history of anthropogenic environmental deterioration long predates most efforts at monitoring or record keeping, however, there has been increasing appreciation of the conservation value of geohistorical records—sources of data on the characteristics of species, communities and ecosystems in the distant past, such as fossils—though their use in conservation and restoration practice is still uncommon. This dissertation aimed to assess the perspectives on geohistorical data among oyster restoration professionals in the United States, and then to produce a case study of conservation-relevant geohistorical data for the eastern oyster, Crassostrea virginica, one of the most ecologically and economically important shellfish species in North America. Chapter 1 demonstrates the overall interest among oyster restoration professionals in geohistorical data and identifies commonalities among the data types needed for oyster restoration and those available from geohistorical records. Chapter 2 develops a method for estimating lifespans of oysters using Mg/Ca profiles from laser ablation-inductively coupled plasma-mass spectrometry analysis of their shells. Finally, Chapter 3 uses this method to estimate lifespan differences between modern C. virginica populations in South Carolina and fossil counterparts that inhabited a warmer interglacial period in the past. It is shown that lifespans for C. virginica were shorter in the warmer climate, and that these differences were consistent with predictions of the metabolic theory of ecology. We end by using the relationship between oyster lifespan and temperature to suggest possible oyster lifespan reductions under future warming scenarios based on current climate model predictions and highlighting some implications of these results for managing, conserving, and restoring oyster populations for the future.