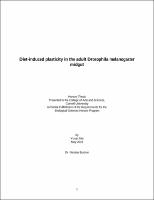 Diet is a foundational factor in metabolism and development. The ratio of dietary macronutrients has significant effects on lifespan and healthspan, and the gut itself has been known to adapt to changes in diet through resizing (Lopez-Otin, et al., 2013; Mattison, et al., 2012; O'Brien et al., 2011). This thesis therefore aimed to study the effects of two diets, a high sugar-low yeast diet (HS) and a high yeast-low sugar diet (HY), on the Drosophila midgut and how variations in genotype affected this interaction. To that end, I studied adaptive gut growth in response to switching between these two diets and characterized the response at the cellular level. I also looked at the effect of genetic variation through analyses of the 30 Global Diversity Lines, 10 of the Drosophila Genetic Reference Panel (DGRP) lines, and twelve different Drosophila species. Finally, I evaluated the influence of specific genes on this gut growth response through a transcription factor RNAi screen of 24 lines and knockout lines of dilp3, dilp5, dilp7, upd3, and upd2/3. I found significant but reversible differences in morphologies of Drosophila guts that were switched between diets, with corresponding changes at the cellular level. This phenomenon was evolutionarily conserved across twelve Drosophila species, but diet-by-genotype interactions were also found in the Global Diversity Lines and a sample of the DGRP. Candidate genes for closer study were identified through a transcription factor disruption screen. Of the mutant lines, only dilp7 had a major effect on gut growth in response to diets. Together, these data show that genotype is important in adaptive gut growth, and future studies will aim to identify and further test genes that are involved in this process.