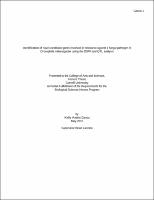 The severity of infection and its effect on organisms differs and has a genetic basis. Though many genes are known to directly play a role in immune pathways, more genes involved in immunity (including those that affect immunity in indirect ways or have multiple functions) are yet to be discovered. I used the model organism, Drosophila melanogaster to determine the genetic factors underlying survival after inoculation by the fungal pathogen, Beauvaria bassiana. A common use for B. bassiana is as a pest control agent in agricultural applications. In this experiment, I used the Drosophila Synthetic Population Resource (DSPR), a series of recombinant inbred lines (RILs) derived from an advanced cross of founder inbred lines. The resistance phenotype was quantified as the proportion of individuals surviving 10 days after infection. I identified 18 quantitative trait loci (QTLs) that are possibly associated with surviving infection. The candidate genes containing those QTL are involved with immunity, gene regulation, metabolism, and development/neural maintenance. Many of the genes also had orthologs with human genes involved in similar roles. My experiments suggest that the immunity and neural pathways may be more integrative than previously known. Further, my analyses revealed the possible role of regulatory genes in the modulation of resistance and survival during infection.