Comment on ‘Support for Redistribution in an Age of Rising Inequality’ 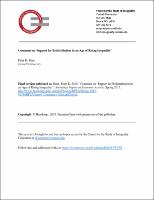 Despite decades of widening income inequality in the United States, public demand for redistribution has remained flat and perhaps even declined. This result, which Vivekinan Ashok, Ilyana Kuziemko, and Ebonya Washington demonstrate convincingly, stands in stark contrast to the expectations of standard political economy models, which predict that as inequality rises a greater proportion of the public will support increased redistribution (Meltzer and Richard 1981).1 This absence of an over-time relationship (or negative relationship) between inequality and public support for redistribution holds major implications for political and economic outcomes. If the public’s policy preferences are disconnected from changes in income inequality, then when inequality rises, policymakers will face no direct electoral incentive to shift taxes and spending in a more redistributive direction.