Romance, Marriage, and Social Class in the Saga World 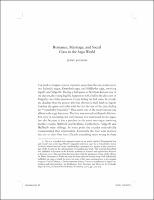 This is a reworked and enlarged version of an article entitled “Extramarital Sex and Social Class in the Saga World” originally written in 1997 for a Festschrift to honor Professor Aaron Gurevich on his 75th birthday. It was presented as a paper at the 1998 meetings of the Society for the Advancement of Scandinavian Study. The Gurevich Festschrift was published in Russian by the Russian Academy of Sciences and appeared in Moscow in he year 2000. This reworking has been done with the permission of one of the editors, Dr. Maria Paramonova.