The Impact of U.S. Subsidies on West African Cotton Production 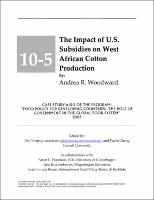 Case Study #10-5 of the Program: ''Food Policy For Developing Countries: The Role Of Government In The Global Food System''

Cotton subsidies and their impact on international prices and on the livelihoods of poor African cotton farmers have become a central focus of the Doha Development Round of World Trade Organization (WTO) negotiations. Cotton subsidies have taken a high profile in part because cotton is a critical crop for some of the world's poorest countries, including the “Cotton 4” countries of Benin, Burkina Faso, Chad, and Mali. Another reason for this attention is that middle-income countries such as Brazil and China have a great deal at stake in cotton trade and much to gain through the elimination and reform of U.S. cotton subsidies. Because of the prominent role cotton plays in the economies of “Cotton 4” countries, a small decline in cotton prices can make an enormous difference in the ability of their farmers to pay for health care, education, and food. A good price for cotton allows farmers to boost production of subsistence crops, slows urbanization by keeping people in rural areas, and creates localized wealth in rural places that need it most. Opponents of the U.S. cotton subsidy program argue that it is trade distorting, because it results in at least a 10 percent reduction in global cotton prices. They also assert that it is a burden on U.S. taxpayers to keep afloat an inefficient industry that would not be profitable without subsidies. Advocates of the program argue that larger factors are at play in the world cotton price and that the impact of U.S. subsidies is negligible. Cotton producers in the United States, West Africa, and middle-income cotton countries have a great deal at stake in the debate over subsidies. The WTO is also a major stakeholder, because some observers see cotton as a litmus test of whether or not the WTO is capable of serving the interests of less powerful countries and poor people. Important questions for all parties include who the real winners will be if subsidies are reformed or eliminated, what the alternatives are for cotton producers who cannot compete in the global market, and what kind of leverage the world's poorest producers might have in future trade negotiations. Your assignment is to prepare cotton subsidy recommendations for the next U.S. farm bill that would be acceptable to all stakeholder groups. Discuss policy issues regarding support for and resistance to the recommendations, justify these recommendations, and assess the consequences for stakeholder groups.

12 pp.©Cornell University, Ithaca, New York. All rights reserved. This case study may be reproduced for educational purposes without express permission but must include acknowledgment to Cornell University. No commercial use is permitted without permission.