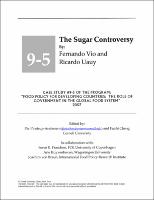 Case Study #9-5 of the Program: ''Food Policy For Developing Countries: The Role Of Government In The Global Food System''

Sugar, one of the world's most important food commodities, provides a high percentage of calories for the population in many countries. But consumption of calories either as sugar or fat by sedentary populations promotes overconsumption of energy and thus may contribute to the “globesity” epidemic and associated chronic diseases. In addition, sugar provides only energy (“empty calories”), potentially leading to micronutrient inadequacy, with corresponding health consequences. The “sugar controversy” has its roots in an expert consultation held in early 2002 by the World Health Organization (WHO) and the Food and Agriculture Organization of the United Nations (FAO) on diet, nutrition, and physical activity for the prevention of chronic disease. This consultation produced a report (Technical Report Series No. 916, or TRS 916) that focused on the dietary and physical activity determinants of major chronic diseases and established the scientific basis for prevention of these conditions (WHO/FAO 2003). As part of the response to the global epidemics of diabetes and obesity (“diabesity”)—major threats to the lives and well-being of populations across the globe—TRS 916 recommended limiting the population's mean intake of added sugars to 10 percent or less of total energy (Nishida et al. 2004). Sugar producers and sugar-exporting countries raised immediate concerns about the consequences of this recommendation for future markets. The recommendation was challenged on the strength of the evidence, its scientific merit, and the assumptions made; the sugar recommendation became the focus of a debate between the nutrition community, the sugar industry, and agricultural policy experts. The two positions contrasted the potential health gains with the economic implications of limiting sugar consumption. This case raises several interesting issues that have wider implications, given that food policy is increasingly being shaped by health and nutrition considerations rather than solely by the economics of agricultural production. This case study analyzes the controversy from the perspective of health and nutrition consequences and presents policy options considering the potential trade-offs for agriculture. Despite the controversy raised by TRS 916, in May 2004, 191 countries at the World Health Assembly adopted the WHO global strategy on diet and physical activity prevention of chronic disease, based on the recommendations of TRS 916, which include the need to restrict sugar intake to no more than 10 percent of total energy intake. Most governments are now implementing this strategy to varying degrees, driven by the urgent need to cope with the increasing problems of obesity, diabetes, and related chronic diseases. In addition, interesting economic alternatives to sugar production are presently being explored. The apparent threat to agriculture offers the possibility of shifting agricultural production from sugar cane to products with greater added value, such as fruits and vegetables. The WHO strategy is actively promoting the production of fruits and vegetables, which favors health, to prevent chronic disease. In addition, the potential use of sugar cane in the production of ethanol as a biofuel demonstrates the need to examine new opportunities in agricultural production that can yield win-win situations for farmers in developing countries. Your assignment is to recommend a position in the sugar controversy to the government of a developing country that faces not only rapidly increasing overweight, obesity, and associated chronic diseases, but also dependence on sugar exports for foreign exchange.

11 pp.©Cornell University, Ithaca, New York. All rights reserved. This case study may be reproduced for educational purposes without express permission but must include acknowledgment to Cornell University. No commercial use is permitted without permission.