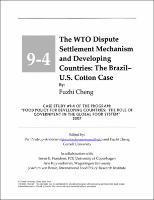 Case Study #9-4 of the Program: ''Food Policy For Developing Countries: The Role Of Government In The Global Food System''

The Dispute Settlement Mechanism (DSM) of the World Trade Organization (WTO) is often seen as one of the major achievements of the multilateral trading system. Many believe that the WTO DSM has introduced greater “legalism” and provides a more “rules-oriented” system relative to the “power-oriented” one of the General Agreement on Tariffs and Trade (GATT). Indeed, since its inception in 1995, more and more developing countries have used this system to pursue their trading rights. More important, trade disputes recently resolved through the WTO DSM have involved successful challenges, by developing countries, to certain unfair trade practices of developed countries, including the Brazilian challenge to U.S. cotton subsidies. Cotton production and trade are highly distorted by policy. Since the late 1990s cotton subsidies in the United States have been frequently criticized for driving down world prices. The continued depression of the world cotton price has made this commodity a hot spot of agricultural trade disputes at the WTO. Citing injury to its domestic cotton industry, Brazil initiated a dispute settlement accusing the United States of provoking and maintaining WTO-inconsistent domestic and trade policies. Relative to the size of national economies, some African countries have suffered far more, but their voice was rarely heard at the WTO DSM. The reluctance of poorer nations to use the WTO DSM to challenge their richer trading partners raises a number of interesting issues. Most fundamentally, it reflects a long-recognized fact that economic and political power still plays an important role in today's world trading system. Because of developing countries' lack of financial, institutional, and human resources, they may find the barriers to using the WTO DSM prohibitively high. For those who manage to enter the DSM or even legally win a case, benefits remain elusive because they can hardly force the losing defendants into compliance. In addition, developing countries risk retaliatory action by rich countries whose trade policies are challenged. This risk is particularly great for the African countries, which are highly dependent on foreign aid from developed countries. Several policy options are offered to address these issues. One way of increasing developing-country access to the DSM is to reduce litigation costs, either by using the legal aid currently offered through the Advisory Centre on WTO Law (ACWL) or by introducing some tailor-made and less-demanding litigation procedures for “small claims.” A mechanism for collecting trade data and the formation of a permanent panel could further reduce dispute settlement costs. During the panel ruling implementation stage, developing countries can build on their retaliatory power by further liberalizing their domestic markets and increasing the export stake of developed countries. Forging alliances with constituencies within the developed countries provides an effective strategy that not only strengthens developing countries' retaliatory power, but also helps them avoid possible political repercussions from the losing party. Your assignment is to propose changes in the WTO DSM that would benefit small, low-income developing countries.

13 pp.©Cornell University, Ithaca, New York. All rights reserved. This case study may be reproduced for educational purposes without express permission but must include acknowledgment to Cornell University. No commercial use is permitted without permission.