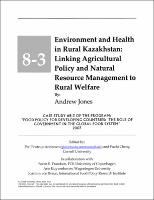 Case Study #8-3 of the Program: ''Food Policy For Developing Countries: The Role Of Government In The Global Food System''

Oil revenues and foreign investment in the Caspian Sea's burgeoning petroleum industry have brought Kazakhstan to the attention of governments and businesses worldwide. While Kazakhstan has made considerable economic strides in the past decade, an increasing urban-rural divide has placed poverty and ill health disproportionately on the shoulders of rural residents. The country's bleak state of rural welfare in the past 15 years is largely explained by its inheritance of degraded natural resources from its Soviet forebears, the economic and social turmoil following the collapse of the Soviet Union, and inequitable, poorly implemented land reform and agricultural policies. Throughout the 20th century, short-sighted environmental policies aimed at enhancing industry and manufacturing helped transform the Soviet Union into an industrial behemoth and world superpower. But this industrial growth transformed the landscape, notably in Kazakhstan, at the expense of the region's rich underlying natural resources. Fragile rangelands and pasturelands were plowed under to grow wheat, arid steppes were deluged with irrigation water to sustain a cotton monoculture, and rivers, seas, and lakes were drained of their vitality and poisoned with industrial effluents. Myopic policies led to a deterioration of air, water, and land; not surprisingly public health in these regions began to plummet as well. After the collapse of the Soviet Union in 1991, Kazakhstan emerged as an independent state caught in a social upheaval, characterized by mass-scale corruption and power struggles, reshuffling of landownership patterns, and an economic downturn that affected agricultural productivity. With the development of its fossil fuel reserves, Kazakhstan has improved its economy, but not to the benefit of all. Although individual farms (that is, family and household farms) are increasing in number and showing superior productivity compared with corporate farms, legislative, financial, and technological impediments prevent smallholder operations from prospering. Local governments lack the authority and funding to carry out state mandates, resulting in ineffective development programs, poor implementation and enforcement of state policies, and escalation of wealth consolidation by powerful private citizens. In short, Kazakhstan lacks a cohesive infrastructure to support rural development and agriculture. A declining fodder base from prior rangeland mismanagement, shifting grazing patterns, antiquated irrigation systems, and imperiled watersheds threaten the viability of natural resources. Thus, future polices must seek to overcome a severely degraded environment in addition to inefficiencies in government and infrastructure. Although efforts are underway to diversify the economy, agriculture is still not a high priority for the government of Kazakhstan. The poor health and welfare of Kazakhstan's millions of agriculturedependent rural residents highlights the paramount importance of immediately addressing issues of agriculture and rural development. Rural families cannot afford to wait for the Kazakhstan of 2030, the country's ubiquitous propaganda slogan, to fulfill their simple hopes of health and social stability. Your assignment is to advise the government of Kazakhstan on how best to reform and integrate its policies on land tenure and agriculture with proper stewardship of natural resources to improve rural health and welfare.

14 pp.©Cornell University, Ithaca, New York. All rights reserved. This case study may be reproduced for educational purposes without express permission but must include acknowledgment to Cornell University. No commercial use is permitted without permission.