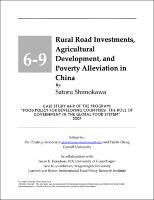 Case Study #6-9 of the Program: ''Food Policy For Developing Countries: The Role Of Government In The Global Food System''

Beginning in late 1978, China adopted a series of policy and institutional reforms and achieved rapid economic growth and poverty reduction. National gross domestic product (GDP) grew at more than 9 percent a year from 1978 to 2005, and per capita income increased by 8 percent a year. The level and speed of economic growth and poverty reduction are diverse across regions, however, and income inequality has worsened between the coastal and inland regions, as well as between urban and rural areas. Although a number of factors have contributed to this widening regional disparity in China, differences in the stock and quality of transportation infrastructure have been among the key factors. When the reforms began in 1978, China's transportation infrastructure was relatively poor compared with that in other countries with a similar level of per capita GDP, like India. Following rapid economic growth during the reform period, the demand for road transport skyrocketed, and transportation shortages and urban congestion became serious problems. The government started increasing its road investments in 1985 and further prioritized road investments in the 1990s. In particular, the government focused on the construction of high-grade roads connecting major cities in the coastal region (such as highways and expressways). With these investments, road density in China increased from 93.1 kilometers per thousand square kilometers in 1979 to 189.2 kilometers per thousand square kilometers in 2002 (National Bureau of Statistics of China 2003). Although the government initially allocated more resources to the coastal region, it has recently started allocating more resources to the inland region, making road projects an important part of the development strategy for that region. The government still emphasizes projects for high-grade roads, however, rather than low-grade and rural roads. In the wake of the rapid economic growth and poverty reduction stimulated by policy and institutional reforms, China now faces a new phase of economic development. The government must adapt its policies and institutions to new socioeconomic circumstances, such as increased regional inequality, decentralization of governance, and past investments in high-grade roads. Your assignment is to advise the Chinese government on a long-term plan that will address rural road development for facilitating agricultural and rural development and poverty alleviation.