The Nutrition Transition in Chile 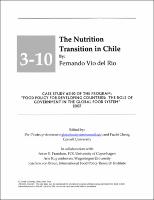 Case Study #3-10 of the Program: ''Food Policy For Developing Countries: The Role Of Government In The Global Food System''

The nutrition transition in Chile has occurred very rapidly. In particular, obesity rates in all age groups have increased instead of decreasing, despite the goals established by the Ministry of Health (MOH) for the period 2000–2010. Data on the nutritional status of the Chilean population from different sources, such as the National Board for Day Care Centers (JUNJI), the National Board for School Assistance and Scholarships (JUNAEB), and the MOH, show that obesity increased significantly during the 1980s and presently constitutes the main nutritional problem of the population. In preschool children who attend day care centers belonging to JUNJI, the prevalence of obesity is 10.6 percent; this figure varies according to age: in 2- to 3-year-olds it is 6 percent; in 3- to 4-year-olds, 11 percent; and in 4- to 5-year-olds, 14 percent. Among first-grade schoolchildren, for which JUNAEB has collected yearly data since 1987, obesity prevalence is currently 18.5 percent. In pregnant women obesity has also increased markedly, from 12 percent in 1987 to 32.6 percent in 2004. For adults, the 2003 National Health Survey of the MOH showed that there is a 22 percent prevalence of obesity (body mass index [BMI] > 30) and a 1.3 percent prevalence of morbid obesity (BMI > 40). Obesity varies according to gender and educational level; it is higher among women (25 percent compared with 19 percent in men) and among adults from low socioeconomic levels. In the year 2000 the MOH established sanitary goals for the decade 2000–2010, aiming to reduce obesity prevalence in preschool children attending JUNJI centers from 10 to 7 percent and in firstgrade schoolchildren from 16 to 12 percent. For pregnant women, the goal was to reduce the prevalence from 32 to 28 percent. Epidemiological and nutrition changes in Chile were so rapid that maternal and child policies were not changed successfully to address these changes until 1998, when the National Board for Health Promotion was created. This commission introduced a strong health promotion policy to cope with the increasing obesity in the country. Nonetheless, although the policy was well designed—it followed a decentralized model for regions and counties, it focused on the main risk factors for chronic diseases, it had well-trained human resources, and it changed food programs to cope with obesity instead of undernutrition—obesity has continued increasing. The main reason for this failure appears to be a lack of political commitment to making obesity prevention a high priority for funding and regulation. A clear, high-priority strategy to prevent obesity is necessary at the national level. It will require the participation of schools and preschools at the county level. It will also require involvement by both the government and the private sector. The government must enact laws and regulations against the marketing of unhealthy food practices by the food industry and promote physical activity at all levels of society. The private sector will need to compromise on issues related to agricultural production that affect cost of high-calorie foods. Without such a strategy, Chile will not accomplish its goals for the year 2010. Your assignment is to recommend a set of policies the Chilean government should pursue to slow down and even eliminate the increase in overweight and obesity in Chile’s population, particularly among children. Justify the policy measures along the food chain, from food production to the effects on public health and nutrition, and assess their likely positive and negative consequences for public health, agriculture, nutrition, and economic development.