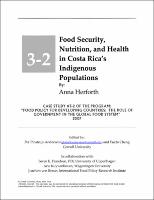 Case Study #3-2 of the Program: ''Food Policy For Developing Countries: The Role Of Government In The Global Food System''

Indigenous groups all over the world have been economically, politically, and socially marginalized and have worse health and nutrition outcomes and more food insecurity than mainstream populations. Costa Rica has been held up as an exemplar country for good development. Per capita gross national income and literacy in Costa Rica is the highest out of all Latin American countries; infant and under-five mortality rates, low birth weight, moderate and severe under-five malnutrition, and maternal mortality rates are the lowest. The indigenous people of Costa Rica, however—eight groups that represent 1.7 percent of the population—have not shared in the benefits of Costa Rica’s development. They have higher infant, child, and general mortality rates and higher rates of malnutrition and infectious disease than the general population. Indigenous reservations constitute much of the 3 percent of the country that lacks potable water, and about 40 percent of the indigenous have access to sewage disposal, compared with 92 percent of the general population. Contributing to these problems are the geographic isolation and poor land of many indigenous reservations, lack of infrastructure, spread-out villages, and pollution from banana plantations that are close to some reservations. To date, agricultural and health interventions lack consideration for traditional indigenous food, farming, and medicine systems. This approach undermines indigenous culture while at the same time failing to provide sufficient opportunities for good health and nutrition: markets and health clinics are scarce in indigenous reservations. Policy options for increased food security and nutrition include encouraging the use of native and wild food crops, improving the productivity of indigenous crops, breeding mainstream crops to suit the soil and climate conditions of the reservations, increasing market opportunities, aiming interventions at women, restoring land productivity in the reservations, moving the reservations to better land, encouraging “agrotourism,” or encouraging a shift in livelihood away from farming. Policy options for improved water supply include building infrastructure for purified water in the reservations and educating indigenous communities about sanitation. For improving overall health, policy options include building more clinics in indigenous reservations, dispatching mobile clinics, encouraging the use of traditional medicine, promoting biomedical education among indigenous youth, using community radio to disseminate health messages, and increasing political commitment to eradicate health disparities. Gender issues are important to consider because many indigenous women are the primary farmers and food providers, particularly if their husbands migrate to find work. All policy options must include indigenous people in active participatory or leadership roles to guide these interventions in the most appropriate and needed direction. Your assignment is to recommend to the government of Costa Rica a set of policy measures to improve the food security, nutrition, and health of the indigenous populations in Costa Rica.

16 pp.©Cornell University, Ithaca, New York. All rights reserved. This case study may be reproduced for educational purposes without express permission but must include acknowledgment to Cornell University. No commercial use is permitted without permission.